Harry was born at 35 weeks with Transposition of the Great Arteries. After a straightforward pregnancy, his parents had no idea that their baby was seriously ill. Here, his mum Claire shares their story: 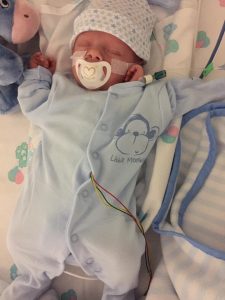 After a plain sailing pregnancy and ‘normal’ scans our only real worry was that he’d maybe be a bit small or need a little help breathing.

When Harry was born, there was a lovely clear cry and he was handed over to the paediatricians on standby for a quick check over.

All seemed great and he was handed to me for our first cuddle.

I stared down at him in absolute awe – he was beautiful!

My awe soon turned to panic when he didn’t start to ‘pink up’ and started blowing bubbles out of his nose and mouth instead of breathing.

He was quickly whisked away from us and we were informed that his oxygen saturations were very low – he needed some help.

They suspected a condition called PPHN and thought that his lungs needed help to ‘open up’. 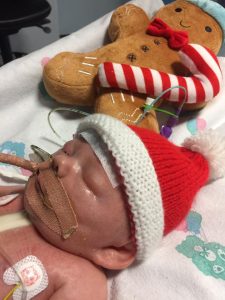 Eight hours after his birth, a helicopter was sent to pick up Harry and take him the Glasgow’s Royal Hospital for children.

The doctor told us that Harry was in a critical condition and might not make the journey…..

Unfortunately, there was no room on the helicopter for me to travel with him, so we had to kiss our son goodbye before we had really had the chance to say hello.

We made the three hour trip to Glasgow by road, not knowing how Harry was or if he was even still alive.

Finally arriving in Glasgow, we were informed that they had scanned our baby’s heart and he had a congenital heart defect called Transposition of the Great Arteries (TGA).

We were in complete shock.

How does something like that even happen? Could it be fixed? Would our baby live a ‘normal’ life? 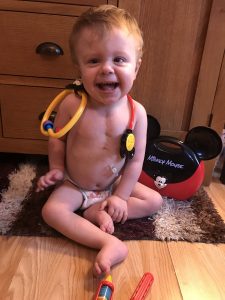 Harry was taken to theatre for an arterial switch operation at 13 days old weighing only 2.5 kgs.

Due to some complications during surgery it was nearly 14 hours before we saw him again.

Nothing in the world can prepare you for seeing your child after heart surgery – it’s an image I will never get out of my head.

Unfortunately, our little warrior’s recovery was pretty complicated and he sustained a brain injury which has left him with some developmental delays.

Despite all this, he is the happiest boy in the world! He loves to flirt and have all the attention!

He had a heart check-up in January, where we had the best news we could have hoped for – they were so happy with his repair that his next check-up is two years away!

We are so grateful to have our little warrior and will never be able to thank everyone who cared/cares for him enough. 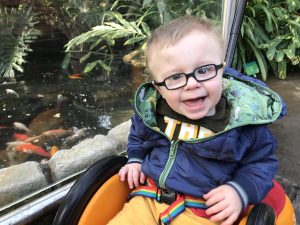 The shock of finding out after our baby was born has been very hard to process and we have always had so many questions and what ifs – perhaps if we had known before – we would have had more time to prepare ourselves, he would have been born with doctors expecting his condition and treating accordingly etc.

This is why we are so thankful for the work that Tiny Tickers do – specialist training and pulse oximetry machines can save so many lives.