Coarctation of the Aorta: Ioan’s Story

When Ioan was born at home, no-one knew he was critically ill. Eventually he was diagnosed with Coarctation of the Aorta. His mum, Emma, tells their story: 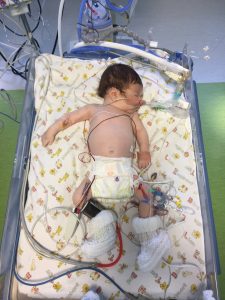 Our third baby, Ioan was born at home on the 23rd of February 2017. It was the most wonderful experience having a home birth.
He did not take to breast feeding right away so I became a master of hand expressing then began using a pump when my milk came in. However, he still struggled to feed from a bottle and his respiratory rate was really high, yet he never made a peep!

We asked several midwives about it, but they just told us it was normal!! At 12 days old I’d had enough and took him to see our GP. After two hours at our local surgery, we were sent to our local A&E.

Eight hours later, Ioan and I were put in the back of an ambulance and transferred to Alder Hey. He was diagnosed with a coarctation and various other issues. Surgery was set for the Friday morning.

Unfortunately, Ioan went into cardiogenic shock on the Thursday morning and his organs were beginning to shut down. He was sedated, intubated and sent to CCU. He stayed there for two weeks while his wee body recovered. His brother and sister visited each weekend and I rarely left his side.

Several viruses later, Ioan finally had a coarctation repair at seven weeks old. He now has six monthly check ups. His aorta is not growing like it should, so we are awaiting a catheter procedure and he will require several valves to be replaced. 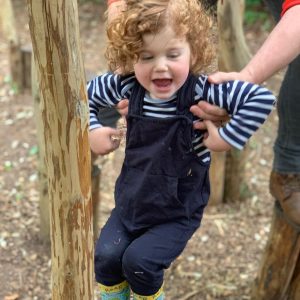 However, he is a very happy boy who copies EVERYTHING his big brother does despite getting out of breath easily. He is a total delight – despite his tricky start to life he brings us all so much joy.