Coarctation of the Aorta: Austin’s Story

Austin was diagnosed with a heart defect, Coarctation of the Aorta, shortly after he was born. His mum, Louise, shares his story: 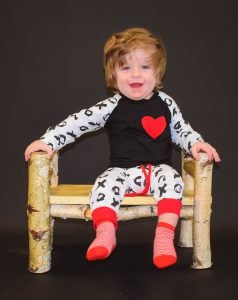 Despite some complications with my own health during pregnancy, the health of our baby didn’t seem affected. All scans were normal and, when I went into labour at 39 weeks, we were excited to meet our baby.

Labour was progressing well until just after I had an epidural and the baby started showing signs of distress. They took the decision to perform an emergency C Section and I was in theatre within 10 minutes. They quickly performed the C Section, said ‘it’s a boy’ and showed him briefly over the surgical sheet but all I could focus on was the fact that he wasn’t crying.

They rushed him to the back of the room and started working on him. He was placed on oxygen and rushed off to High Dependency, my husband went with him. I didn’t get to see him until he was ten hours old and he had then been moved to Intensive Care. We named him Austin and just hoped for a sudden improvement. Unfortunately, we were told there were issues with his blood sugar as well as his breathing and we couldn’t hold him that first day. His condition didn’t improve and he needed help breathing. Austin was diagnosed with Coarctation of the Aorta when he was two days old. We were told surgery couldn’t wait and we would need to be transferred to Southampton General Hospital for heart surgery.

When he was four days old, Austin was transferred to Southampton from Oxford by ambulance. We were told we couldn’t travel in the ambulance with him and they asked us not to follow in case anything happened en route. The fear was overwhelming – it all felt like a bad dream.

On day five at Southampton, the surgeon and anaesthetist explained what the operation would entail and we consented. The day of surgery was the worst day of my life, seeing his little eyes roll back as they put him under will never leave me. However, our boy was a complete trooper and was out of surgery within a couple of hours. He stayed in the PICU for just 24 hours before being transferred back to the ward, less time than they expected. We were in hospital until he was three weeks old but he made huge strides and his recovery was remarkable.

Austin is now a heart healthy, happy and energetic 20 month old. The care he received was second to none and we are eternally grateful to every person who cared for Austin during his journey.