Coarctation of the Aorta: Cruze’s Story

When Cruze was born with Coarctation of the Aorta, he left hospital with no one knowing how ill he was. Here his mum, Natalie, shares their story: 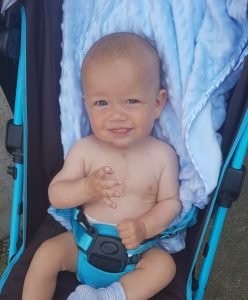 Cruze was four weeks old when he fought a cold, which  my other children also had.  He wasn’t waking or feeding so I immediately rushed him to A&E at the QMC in Nottingham.

On arrival, he turned blue so they whisked him in straight away. His breathing was awful, so he had to go to intensive care. Once he was stable, they did a heart scan and we found out he had coarctation of the aorta and two VSDs. His aorta was so narrow that the blood wasn’t pumping around his body and he’d lost feeling in his legs.

The next day he was put into a coma and rushed to Glenfield at Leicester. He spent several weeks in PICU, fighting off pneumonia and rhino virus before they could do the surgery. His lungs also collapsed and he was on a ventilator for two weeks.

Cruze had his six hour long open heart surgery on the 29/4/19 and recovered really quickly. He went to the ward four days later and was discharged on the 4/5/19.

After spending a week at home, he was readmitted due to an infection on the wound and spent another three days at Glenfield on IV antibiotics. And he has been at home ever since! 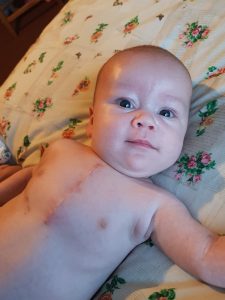 The whole journey for us as a family was heart-breaking and it all happened so quick. Cruze still needs more surgery in the future but for now he is doing really well – the courage and fight these young babies have is unbelievable! CHD warriors are amazing and Glenfield Hospital and Heart Link will always be close to our hearts as they really are amazing.