At her 20 week scan, Jade discovered that her baby had a heart condition called Transposition of the Great Arteries (TGA). Here she tells Colt’s story: 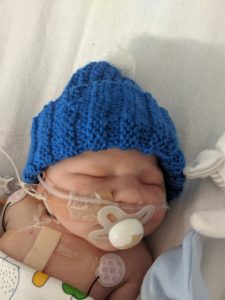 At our 20 week scan, we were advised there was a possibility that our baby boy had a problem with his heart and that we would need to go to have another scan with the fetal medicine and cardiologist to verify.

Three days later we went in and the cardiologist confirmed that Colt had Transposition of the Great Arteries, a small VSD and thickening of the pulmonary artery. We were followed up constantly throughout the pregnancy and at our next scans doctors confirmed the VSD was getting smaller and the pulmonary artery was now growing at the same rate as the aorta. They also confirmed that the natural hole at the top of the heart seemed good enough to just have Prostin at birth and he wouldn’t need the balloon septostomy.

At 39 weeks and 5 days, following an induction, Colt was born. They whisked him off after a brief hold immediately after birth and we weren’t able to see him for hours whilst they completed all checks on him. When we were able to see him, he only needed Prostin and so the keyhole surgery to assist in the blood flow of oxygenated blood was unnecessary. 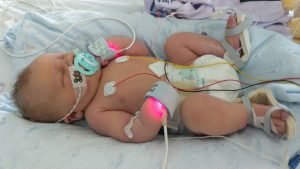 The next day we were transferred to the children’s hospital in Birmingham ready to continue the journey. When Colt was four days old, we signed the papers to agree to surgery and also agreed to take part in a clinical trial to study the effect of the thyroid hormone on babies with CHD.

The next day Colt was taken down for his surgery. It was the longest and worst seven hours of our lives. When we got to see him, the surgeon confirmed that he found Colt had an intermural coronary, so they had to complete a patch when they transferred the arteries over. 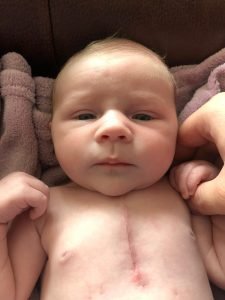 Less than 24 hours later, his breathing tube was removed, and his oxygen tube was at a low percentage just for a small boost. After 46 hours and at at seven days old, we were transferred back to the ward from PICU.

A few days later all tubes and lines were removed and, when Colt was 13 days old, we were discharged to go home. We have constant check-ups but we know that without Tiny Tickers’ training, we could have a whole different situation with our baby.

Colt is now 14 months old and such a mischievous monkey! He was walking at nine months and loves to dance. He loves sorting his shapes, stacking and Mommy reading books to him. He also has a mouthful of teeth and is a little piranha!

At six months Colt was able to stop his aspirin and, after three monthly appointments up until nine months, the consultant was happy to move his appointments to every nine months.

We are aware from his appointment back in march that he has a trivial leak and trivial dilation of the aortic root which may need intervention when he gets older but right now they are happy that it’s so trivial it’s nothing to worry about.

After so much worry and concern that what he went through would hold him back, you would never know he had open heart surgery at five days old. They told us that TGA babies can have learning delays, however Colt is the most clever little boy and lets nothing phase him.