When Harrison was born, doctor’s detected a slight heart murmur, however it wasn’t until he was 5 days old that his heart condition, Pulmonary Valve Stenosis, was diagnosed. His mum, Amy, tells their story: 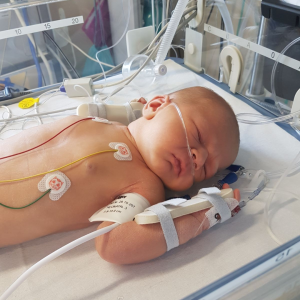 I had a relatively normal pregnancy, although I had noticed that movements weren’t as often as with my first. My midwife told me boys were lazy and, as long as I felt several movements a day, then not to worry. My due date came and went, which was a shock as my daughter was born ten days early! My induction was booked for when I was 40+12, but he held on until the last minute and my contractions started five hours before I was due to be admitted!

Labour was much more difficult than with my daughter and he was getting very tired; I put it down to him being 2lb heavier than my daughter. If only we knew. All of my pre-natal scans had showed no concerns at all.

Eventually Harrison was born. Our family was complete. He had to be given help and oxygen as soon as he was born as he wasn’t breathing properly, but they told me it happens a lot and not to worry. We stayed on the ward for a couple of days as the doctors detected a heart murmur, again telling me it was quite normal and that most babies grow out of it. I also found that he took a while to feed and would get very tired.

We were sent home when Harrison was two days old and told to go back in a few days for a check on the heart murmur. We arranged to go back when he was five days old, the day before my little sister’s wedding (for which I was bridesmaid!)

In the time we were home, he continued to be slow at feeding, slept a lot and seemed to have a blueish tinge around his mouth. Everyone just kept saying he had wind, but I wasn’t sure as he never seemed uncomfortable like my daughter did when she’d had wind. As we were due to go back to the hospital, I just thought I’d mention it when we went there.

When we went back to the hospital, the doctor seemed to take an age checking everything before saying that she needed to get the consultant to check something. This is when I knew there was something wrong. His oxygen levels were reading at 67% and an ultrasound confirmed that he was suffering from a pulmonary valve stenosis. They told us that had we not taken him in when we did,  we would have been lucky to still have him for another 24 hours!

Fast forward a couple of hours, blood tests, ECGs, drugs, wires, monitors and lots of tears and we were packed off with Harrison tucked up in an incubator, in an emergency ambulance, being sent three hours away to Southampton Children’s Hospital.

Our three year old daughter was left with my mum as she was a flower girl for my sister and we arrived at Southampton at 10pm. I had no sleep that night, I just sat watching my tiny baby breathing and panicking every time the numbers on the monitors dropped. The surgeon came around and explained that he wanted to perform a balloon dilation of the valve and that they wanted to do this the next day.

So, at six days old, while my sister was getting married 150 miles away, we signed the consent form while being told of the risk of death. I’ve never been so scared.

The procedure went well, his SATS improved and we were sent home a week later. Terrified of something going wrong I spent night after night watching him and feeling guilty for having to look after my daughter too, but then I felt worse for her as she’d never had to share me.

Daily checks went to weekly, then fortnightly, monthly, three monthly, six monthly, and now yearly! He still has a slight heart murmur, but we’ve been told it’s not significant and his heart is working as normally as they expect. He now runs around like any other little boy and has just celebrated his second birthday!