Kithma discovered her second baby, River, had Transposition of the Great Arteries at her 20 week scan. Here she shares their story: Being a cancer survivor who underwent a year of chemotherapy, we were told that I may never conceive. So, when we fell pregnant with our first son in 2016 we felt incredibly lucky and, after a fairly smooth pregnancy, a healthy baby was born.

When we were lucky enough to fall pregnant again in 2018, we assumed rather naively that it would be the same again. However, at my 20 week scan, I was told that the baby was not in the correct position to view the heart properly and was asked to come back the week after, which was Christmas Eve.

Thinking that it would be a quick scan I left my husband at home with our two year old and went to the hospital. There after about 20 minutes, the sonographer said that she could notice something wrong with the baby’s heart and that she was going to seek a second opinion. Another sonographer had a look as well and he got a midwife to speak with me.

They informed me that there was something structurally wrong with my baby’s heart and that they would have to refer me to Great Ormond Street Hospital for a diagnosis. That kind midwife got us an appointment at GOSH for 2pm that same day on Christmas Eve! My husband and I made our way there as fast as we could and managed to get in just minutes before 2pm.

There, our baby was diagnosed with simple Transposition of the Great Arteries. We felt as though our whole world fell apart and we left the hospital broken.

We had regular scans with the GOSH team and it was decided that I would be induced at University College Hospital London at 38 weeks, as we lived quite a distance away from GOSH and they were worried that I may go in to labour at home. 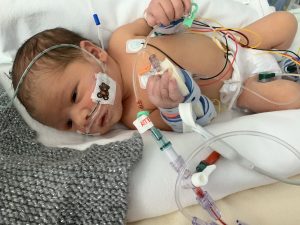 Our beautiful baby boy, River, was born on the 2nd of May following a rather traumatic labour and delivery for us both. My husband said there were around 20 people in the theatre. He was more poorly than the doctors had anticipated, so he was whisked away and intubated. I didn’t even see my baby properly. River also needed an atrial balloon septostomy as well as prostin to keep his blood oxygen levels up.

There was a lot of concern regarding his health for first two days, but our strong little man was eventually weaned off the ventilator at three and a half days old.

He was then transferred to GOSH and they carried out the arterial switch operation at eight days old. I kissed his little forehead just as the anaesthesia was taking hold and I have never felt so much fear and heartache in my whole life. It felt as painful as actual physical pain. We sat in our hospital accommodation in silence waiting for the phone to ring for around seven hours.

Seeing River for the first time after surgery was heart breaking. In addition to the surgery site, there were drainage holes for blood and fluids, three cannulas, a central line through his neck and he was, of course, on the ventilator again.

We watched him slowly gain strength and one by one the tubes and wires were removed from his body. We finally felt as though we could see the light at the end of the tunnel. At eleven days old, I had my second skin to skin cuddle with my baby. We were discharged once his last wire and NG tube was removed, breastfeeding was established, and he started to gain weight.

At our check-up, we saw the same familiar faces that took care of us all the way from 20 weeks of pregnancy and will keep doing so till he is 16 years old. The consultants are thrilled with how well River is doing and as his parents we could not be prouder of him. He has taught us so much about love, hope and strength in these few months. For a mum, postpartum when your baby is in hospital is awful and wrong. I didn’t have a baby waking me in the middle of the night crying to be fed, I had alarms set for every three hours to remind me to pump instead. Skin to skin, newborn cuddles, changing nappies, those quiet moments when the whole world is asleep except for you and your beautiful baby, those precious moments were all taken away from me by CHD.

So, I hope by sharing our story that we can help another family. I will forever be grateful to our amazing NHS and the teams at GOSH and UCLH who took such loving and compassionate care of not only our son but all of us as well, because without them I would not be here today, cuddling my sleeping son, typing his story to be shared with the world.