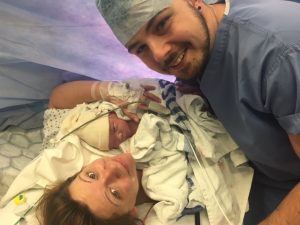 On 23rd of May 2019, after a long labour and emergency c-section, our lives changed when Arthur came into our lives.

18 weeks before this, we received the devastating news at we were going to have a child with a serious heart condition. Arthur was diagnosed prenatally with Transposition of the Great Arteries and a double inlet left ventricle. Getting our heads round this was incredibly difficult, but with the support of the amazing team at the Bristol Royal Children’s Hospital, we were as prepared as we could be for the arrival of our boy.

When we saw him raised up above the curtain, he was kicking and screaming and bright pink! The most beautiful baby. He was wrapped up in a blanket and given to us for a quick cuddle. Immediately after this, he was taken into the NICU at St Michael’s Hospital in Bristol, where he was given life-saving medication (Dinoprostin) before being transferred to the main hospital three days later. At 11 days old he had his first surgery, where they inserted a PDA stent into his heart, and five days later he was home for the first time!

We had six wonderful weeks at home, with a cardiac nurse visiting twice weekly to check on Arthur. Then on Wednesday 17th July 2019, Arthur was struggling for breath and having bloody sick. We rushed back down to the hospital – his saturations were 45% and within 15 minutes we had around 18 members of staff surrounding us.

He was taken straight to intensive care and put on oxygen. For the next two days he was stable. But the following Saturday, we got called in at 3 am to say he may not survive the night. Arthur had to be intubated to breathe and was put into a coma. My darling 8-week-old baby was lying lifeless in a bed. The doctors noticed Arthur’s lung had collapsed due to a fluid build-up. They gave medicine to break the fluid down and inserted a chest drain to try to clear.

Two days after this, we got called in at 3am again. This time Arthur had drained 150ml of blood within the hour and again they don’t know if he would survive.

It turned out that, due to his anti-coagulation medication for his PDA stent, the medication given to break down the fluid caused a spontaneous haemorrhage. He needed emergency surgery to clear out all that blood and do an antibiotic wash out.

He started to recover from the surgery, although still intubated, he was out of the coma and 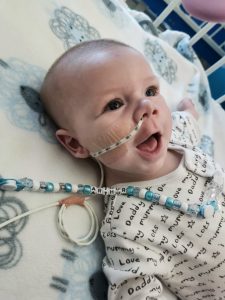 starting to come round. But, three days later, he had blood in his nappy and the doctors found gases leaking from his bowel. Arthur now had Necrotising enterocolitis (NEC).

He had to be on three types of antibiotics & was nil by mouth for ten days.

Five days passed and Arthur was coming off his breathing tube! He took it so well and was staying stable. We moved up to High Dependancy ward, where he continued to get better.

The pain specialist then decided to stop the morphine and midazolam and Arthur started to get the jitters. Normal withdrawal symptoms, they said. So, we just carried on monitoring him.

The jitters got worse and worse, eventually the neurologist got involved and confirmed that in fact they were called ‘acute systematic seizures’. After an EEG and MRI, with doctors trying to work out what had happened, we were told Arthur had, on top of everything, had a stroke. The seizures were a result of this. 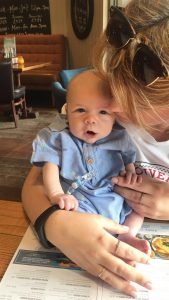 Arthur is now 12 weeks old and is finally able to come home!!!

We have spent half his life in the Bristol Royal Hospital for children and they have saved my son’s life not once, not twice, but three times already. I don’t think I could ever repay them for what they’ve done, not just for Arthur, but for us as a family. From the upbeat nurses to the consultants, friendly reception staff and housekeepers – I am eternally grateful for all they do.