Harrison was born with a number of complex heart defects, which were thankfully detected at his mum, Hannah’s, 20-week scan. This is their story: 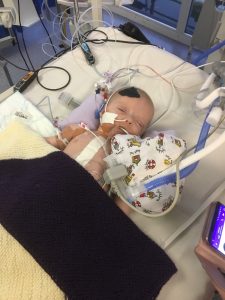 At my prenatal scans we were pre-warned that when Harrison would be born, he would need surgery straight away to fit a band to his pulmonary artery to control the amount of blood flow to his lungs, and would require a lengthy stay in hospital. They said it could be weeks or months – it was an uncertain.

Harrison was born on the 12th September 2018 with a very complex anatomy.He has an isomerism, which is where his internal organs have switched places. His stomach is on the opposite side, kidneys, multiple spleens and two left lungs.

The good news when he finally did arrive by emergency c section, was that we only stayed a week in hospital. His saturations were in the 90s, his colour was great and Southampton Hospital said he was doing so well that he wouldn’t need an operation yet…

Ten weeks went by Harrison started to become unresponsive in the car seat, I rung 999 one day as he took ages to rouse – even shaking him gently would not wake him. After about three minutes he did. When we arrived at our local hospital, Harrison was well alert and we were told he was fine and could go home. I knew, as a mummy, something was not right. I rung Southampton who had us transferred straight over.

I never thought that night we would be in hospital for eight weeks..

Harrison underwent surgery to have a PA band fitted and the surgery went well. However, the next day his saturations has dropped to 40%. They closed PICU as they needed to get this PA band off quickly and didn’t have time to get him into theatre.

The surgery took about an hour to get the band taken off, the surgeons then decided to leave Harrison’s chest open for 24 hours to make sure it did not need to be placed back on.

Harrison then spent a week in PICU and went back up to the ward.

The next day at 7am, we got a call at Ronald McDonald to say Harrison had suffered an arrest because part of his heart stopped working. He was rushed back into PICU where they worked their magic and saved our boy.

Three days went by and back to the ward we went…Then Harrison started getting very breathless and building up fluid on his lungs.

He was getting pulmonary hypertension, so the surgeons decided to open him back up again and fit the PA band. His pressures had changed in his lungs and he was now big enough to have this fitted.

The band was fitted again and after weeks in hospital we finally got to go home. 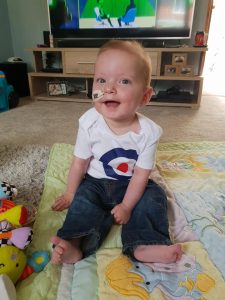 Harrison is doing well at at the moment. His saturations sit between 70-85% – they cannot be any higher this means too much blood is going to his lungs.

We have regular check ups, and he will need to have a full repair on his heart when he is about 10 kilos unless the band fails in the mean time.

With regards to his internal organs, we were told this should not cause any problems in later life.

Harrison is a happy little boy. He is NG fed as struggles to take bottle after being ventilated five times. He has forgotten how to suck and swallow. Getting food into him is a difficulty and he does get breathless.