At her 20 week scan, Sarah received the devastating news that her baby had Tetralogy of Fallot (TOF). After many scans and tests, a plan was put in place for Ethan’s delivery. In this emotional first instalment of their story, Sarah remembers how she felt when she received the diagnosis and waited for the results of her amniocentesis: 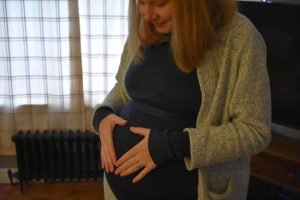 Having experienced the heartbreak of a miscarriage at the start of the new year, I was beyond elated when I discovered that I was expecting. I tried to control my joy and deep thought for fear of another miscarriage, but my mind always went to the future family life I had always dreamed of.

The weeks went by and I started to believe that this could be it. To settle my nerves, we decided to pay to have a private ultrasound scan at ten weeks. To my relief, ‘Tiny’ was safe and sound and growing in line with expectations. An NHS scan at thirteen weeks was also positive and gave us a wonderful chance to see our baby again.

After these scans, we felt able to share the wonderful news with family and friends. We could finally start to plan for our impending arrival. The morning sickness passed and I was enjoying the pregnancy, left in wonderment at what my body could do, day
dreaming of magical family times ahead.

My world came shattering to a screeching halt at our twenty week anomaly scan. The scan seemed to be going well, and it was revealed that we were expecting a son. However, as time went on, the sonographer became quiet and said that she couldn’t quite see something very well on the heart. I sank. I knew in that instant that something was wrong. The sonographer left the room and returned
with a colleague who also viewed the images. After a brief muttered conference between the two sonographers, we were told that the baby’s heart anatomy was not normal.

I couldn’t breathe, my mind raced. We were ushered out of the ultrasound room and into a small and dreary windowless room tucked away from the main waiting area, where we waited to hear more. Time stopped in that room, it was silent, and it took all of our strength to keep it together.

Thankfully, the consultant, was on call that afternoon and was able to perform a further ultrasound scan to provide a provisional diagnosis. The diagnosis given was Tetralogy of Fallot. Tetralogy of Fallot comprises of four heart abnormalities: 1) a narrow pulmonary valve; 2) a large hole between the two ventricles called a Ventricular Septal Defect or VSD; 3) the aorta is positioned over
the left and right ventricles instead of just the left; and 4) an enlarged and more muscular right ventricle. The VSD results in the mixing of oxygen-rich and oxygen-poor blood and so not enough oxygen-rich blood circulates in the body. The consultant explained the condition to us and gave us the opportunity to ask some initial questions. 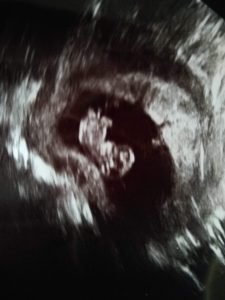 When we left the hospital that day, we knew our lives were changed forever. We researched the condition extensively and over the next week we came up with a thousand questions for the specialists. In some ways I was coming to terms with the heart condition itself, as I had belief that it was treatable. However, a huge black cloud remained over the possibility of an underlying genetic disorder such as 22q deletion.

For us, it was important to know whether this was the case, and so we decided to have an amniocentesis performed. Two weeks after finding out the news, we had an appointment at Leicester Royal Hospital. The consultant confirmed the diagnosis as TOF and provided some answers to our questions.

On the same day, I had an amniocentesis. I was terrified and even as I signed the consent form, I wondered if I was doing the right thing, given the risk of miscarriage. However, I knew for us, it was something we needed to do and so we went through with it. Then came the agonising two week wait for the results, where time stood still and every day was an emotional rollercoaster of ‘what ifs’ and ‘why me’, along with endless google searches ‘down a rabbit hole’. I tried to remain positive, but as the days went on I admit I lost hope, almost like a self preservation tool so that if the worst happened at least I hadn’t dared to dream of more. The horror of terminating the pregnancy rattled around inside me (I was shocked that a nurse at the hospital had even explained how a termination would be performed, coming out with statements that still haunt me).

Fourteen days after the procedure, we called the hospital, but alas no results. On the fifteenth day, we received a call. My chest tightened whilst Chris answered, and then he smiled and the relief washed over me. They had not found any genetic anomalies in the culture.

So we continued with our pregnancy journey, with regular appointments both at QMC and LRI with a number of
fantastic Consultant Cardiologists. At 28 weeks, in addition to TOF, it was suspected that there was also an Aorto-pulmonary ‘AP’ window, which was later confirmed to be the case (this is a rare CHD where there is a connection between the aorta and the pulmonary artery).

This meant that rather than potentially waiting four to six months for surgery, it would be required shortly after birth. At 34 weeks, doctors made a plan to transfer baby from the QMC to Glenfield Hospital within 48 hours after birth.

You can read part two of Ethan’s story here.