In part one of Ethan’s story, Sarah told us about discovering her baby had a heart condition called Tetralogy of Fallot (TOF) at her 20 week scan. You can read part one here.

In part two, Sarah shares her experiences of giving birth and NICU: 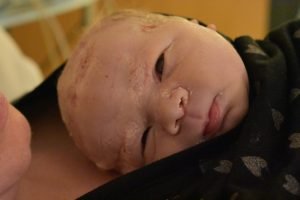 I was to be induced at 39 weeks so that the labour could be managed in terms of there being a neonatal intensive care bed available for our baby. On Tuesday 9th October, we went to QMC to start the induction process; however, upon examination by a midwife, our baby was found to be in breach position (despite being engaged for several weeks prior to this). We were given the choice of
an ECV to try and turn him into the correct position or opt for a caesarian section.

Yet more decisions to make when already so anxious. We decided to try an ECV to potentially avoid a Csection, but when it came to it, he had made yet another about-turn into the favourable birthing position (the midwifes couldn’t quite believe that I hadn’t felt it – perhaps I was so tied in knots anyway that it went unnoticed as a separate incident by me)? 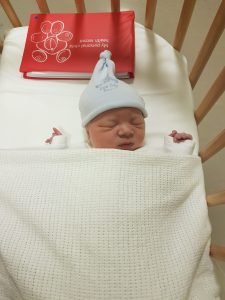 And so the induction began, firstly with the insertion of a hormonal pessary. After several hours, my body began having strong contractions – unfortunately too strong, too soon. The midwife decided to remove the pessary and administered an opiate to help me rest a little that night.

The following day, the team decided to artificially break my waters. As the baby wasn’t engaged there was a risk of the umbilical cord moving below the baby and so in case that happened theatre was prepared for an emergency C-section. Thankfully that wasn’t required and after a couple of hours, contractions started again, but then dwindled after an hour or so. We moved to the next stage of induction; the Syntocinon drip was administered via cannula in increasing doses.

Soon after, I was in the throes of labour. I do remember thinking that the pain was so acute and something I never wish to repeat. I remember having some very scary and confused thoughts (probably part of the delirium of gas and air). At one point I even thought the
baby’s heart wasn’t beating and I needed the midwife to assure me that he was fine multiple times. The pushing stage felt like it lasted a lifetime and I was becoming more and more exhausted with every push. 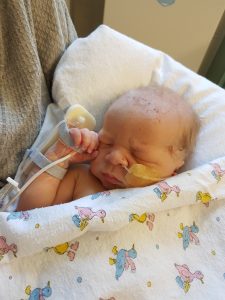 At the brink of requiring an episiotomy, a few final pushes and our son was born. We named him Ethan Paul Butler (Ethan meaning ‘strength and long life’ and Paul in memory of Chris’ father who passed away in June).

I had my first cuddle skin to skin and it was the most overwhelming embrace of pure love. After the cord was cut, Ethan was given a complete once over by a baby doctor and the midwife, with Chris by his side all the while – all seemed well and Ethan was given back to me to hold. The doctor said she’d be back in twenty minutes to take him through to NICU, but due to another emergency, it was
actually four hours before he was taken (again with Chris by his side).

The sheer exhaustion took over my body and I slept for a couple of hours before Chris returned to me. In that time Ethan had begun ‘grunting’, a potential sign of infection, and so as a matter of course had been started on a course of antibiotics. The grunting stopped after a while, and other than that he appeared to be relatively well.

Chris then took me in a wheelchair round to NICU to see Ethan. It was a shock entering the unit for the first time. He was in a small cot, rather than an incubator, in contrast to most of the other babies in NICU (predominantly premature babies). Despite probably being the largest baby in that room, he looked so tiny and vulnerable in there and I just wanted to hold him. He had a cannula in his wrist to
administer the antibiotics, a nasal-gastric tube inserted in his nose for feeding, and monitoring wires for oxygen levels and heart rate. He was sleeping peacefully despite the surrounding noise that was deafening to me – people and beeping machines everywhere. We just watched him and waited. 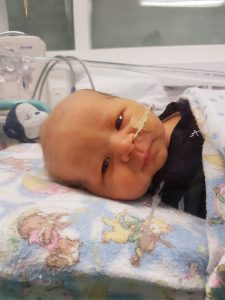 An echo of Ethan’s heart showed that his pulmonary valve was not quite as narrow as previously recorded in utero (some good news); however, an additional small hole between the two atriums was detected. Otherwise, his diagnosis and prognosis was unchanged. And so the next phase of ‘hospital life’ began.

We went to and fro between NICU and the ward where I had a room. Whilst on NICU, we were able to carry out some of Ethan’s ‘cares’, which included washing him, changing him and even gravity feeding him via the NG tube.

I was really determined to try and give Ethan expressed breast milk if I could, with the hope that eventually I could establish breastfeeding with him. To begin with I was hand expressing tiny amounts of colostrum, collecting it by 1ml syringe. It took ages and ages just to squeeze the tiniest amount out. Then my milk came in and gradually I was able to express more using an electric pump (the Medela pump was brilliant, once I worked out how to use it).

It was utterly exhausting though, having to pump every three hours to try and maintain my supply. My hormones were all over the place at this point and I was very teary. In a lot of ways though it felt like so much control had been taken away from me as a new mother, and expressing milk was one thing that I could actually do for my baby. I think that thought kept me going when I
felt like giving up.

We were in limbo, waiting for a bed to become available at Glenfield. Despite being told that Ethan needed to be transferred within 48 hours, with no bed, it wasn’t until four days later that we could move. All of a sudden a bed became available and I dashed around trying to get myself discharged so that I could travel in the ambulance with Ethan. Thankfully a friendly midwife put other things aside
to get me discharged quickly, and within an hour we were off.

I sat in the front of the vehicle, whilst Ethan was in a travel incubator in the back. I was relieved that I could be with him for this, but
scared senseless by what might come next.