What were you doing 20 years ago? I’d just finished university and had started my first job – a trainee journalist in the newsroom of a national news agency. November 1999 – I was a month away from getting engaged, and Richard Madeley was busy stockpiling cans of baked beans and candles in anticipation of the Millennium Bug that never was. The world was preparing to usher in a new era. Meanwhile, in London, a group of trustees made up of health professionals and patient families was coming together to form a brand new charity. One that would focus on improving the survival chances and longer term outcomes for babies with congenital heart disease. The charity that would become (one rebrand later) Tiny Tickers. 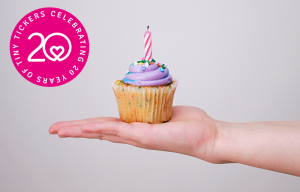 Charities are created because a group of passionate individuals see a need for change, and do something about it. I’m often reminded of one of my favourite quotes, from Apple founder Steve Jobs, that “the people who are crazy enough to think they can change the world, are the ones who do”. Led by Prof Helena Gardiner, Tiny Tickers set out to change the world for babies with CHD.

There was no doubt what needed changing – too many babies were dying. Sixty years ago, the majority of babies born with CHD did not survive to see their first birthday. Many more didn’t live to become adults. The development of cardiac surgery was changing that, but there was still much more to be done.

Early detection was key – getting babies into the surgical system so they stood a chance. The national antenatal detection rate was just a nudge over 23% when Tiny Tickers was set up – and the charity’s mission was to change that. They soon set about training sonographers; campaigning to improve service standards; and embarking on research that would aid detection and diagnosis.

While all this was happening, I was blissfully unaware of the world of CHD. My experience came seven years later, in 2006, when my wife and I walked into our 20 week scan full of excitement and anticipation; and walked out of it full of fear and dread. Our sonographer had spotted a problem with our daughter’s heart. But, we were among the lucky ones – we experienced first-hand the difference early
detection can make, and the wonders that surgical teams can perform.

Back in 1999, I had no idea the path my life would take – the journey that would eventually lead me to joining Tiny Tickers. I was too busy learning about the world of work; bracing myself for the final episode of Gladiators; and trying to get the earworm that was Mambo No.5 out of my head. 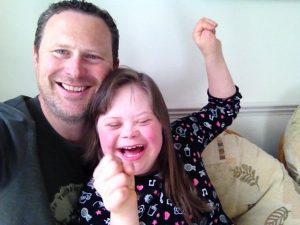 You see, that’s what CHD does. It doesn’t discriminate. It just happens. Wham – it rips up the plans you make and sets you off on a journey no one would chose and no one can understand unless they’ve walked the same path.

So, 20 years into Tiny Tickers’ mission, how are we doing? I think, for a small charity, we have punched above our weight and made a big impact.

That average national antenatal detection rate – that was 23% – is now more than 50%. So, the percentage of babies whose potentially life-threatening CHD is being spotted before they are born has doubled in those 20 years. We can’t take all the credit for that, of course, but we’ve provided expert training to thousands of sonographers in that time and we know that has had an impact.

We campaigned for sonographers to have to capture a fifth view of the heart, on top of the four views they had to take. We trained sonographers to capture this view for years before the NHS made it compulsory. But, now it is, and more heart conditions
are spotted as a result.

Twenty years ago, pulse oximetry screening of newborns for heart conditions wasn’t even on the horizon. But, now, around half of newborns have this test – hundreds of thousands of them on machines we have funded for hospitals around the UK.

We’ve collaborated to improve standards in other ways – helping reduce the time between a sonographer suspecting your baby has CHD and your specialist appointment to confirm (or not) the diagnosis; ensuring specialist nurses are on hand on the day of diagnosis so parents get the support they need without delay.

We’ve introduced a number of projects to help families deal with the difficult news that their baby has a heart problem, and the immensely challenging time of open heart surgery and other treatments. We’re proud to stand up for parents and make
sure their voice is heard by NHS decision-makers.

But celebrating a birthday isn’t just about reflecting on progress – it’s about looking to the future.

We’ll continue to work every day on our four objectives:

1. We’ll train and support sonographers and other health professionals working to help patients with CHD;
2. We’ll influence service standards and be a voice for CHD patients and their families;
3. We’ll fund equipment and support new technologies to improve detection, diagnosis and treatment of CHD;
4. We’ll provide families with information, advice and access to support during their CHD journey.

Where do we want to be by our 40th birthday, 20 more years from now?

Our vision is simple to articulate but difficult to achieve – we want every baby with a serious heart condition to have the best chance of survival and quality of life. Antenatal detection rates have risen from 23% to 50% in the last 20 years. We want
to see the same improvement again – let’s get to 75%.

We’ve gone from zero newborns having a pulse oximetry test, to around half of newborns having one. Let’s make sure it becomes a mandatory part of screening, so every baby is offered the test that could help save their life.

And let’s make sure every parent receives the help and support they need, as soon as they need it – to help them through what is a point of crisis in their lives.

There are now around 250,000 adults living with CHD in the UK – that means that more adults are alive with CHD than children, and is a fabulous testament to improvements in diagnosis, surgery and treatment in recent decades. But all too frequently, here at Tiny Tickers, we hear from families that haven’t had a positive outcome – including babies whose CHD has only been detected for the first time
after their deaths.

I’ve seen what the NHS is capable of doing once a baby is in their care, and I want every baby to have that same chance as my daughter, Zoe. Tiny Tickers has come a long way, but we still have so much more to do to ensure no baby dies before their heart defect is spotted.

Your support has got us as far as we have over the last 20 years; and that support will drive our next 20 years.