Sarah discovered her baby, Ethan, had a heart condition called Tetralogy of Fallot (TOF) at her 20 week scan. Sarah talked about her pregnancy and Ethan’s birth in parts one and two of Ethan’s story. 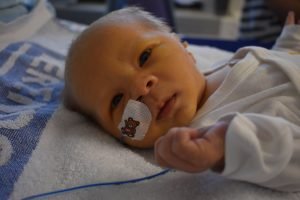 When we arrived at Glenfield, we were taken to Ward 30 and Ethan was admitted. He was in such a big cot there and looked so tiny in it. Not long after we arrived, Ethan had an echo performed by one of the doctors and various observations carried out. I remember just standing at his bedside staring at the screen, not really understanding anything, not knowing anyone, and actually still in quite a lot
of discomfort from the birth.

We met with our consultant, who reviewed the latest images and discussed next steps with us. He indicated that Ethan appeared well at this stage and that there was even a possibility of going home and delaying surgery (which we were very surprised at). Ethan’s treatment
was to be discussed in a team meeting the following morning, so we waited for more information.

Chris and I were able to stay at the hospital in a parents room provided by the incredible charity Heartlink. The next morning we waited with baited breath to find out what decisions had been made, but because surgeons were unavailable, a definitive plan had not been made, and we needed to wait until all specialists had given their input to treatment discussions.

So, once again, in a strange limbo, we continued with hospital life. We stayed by Ethan’s bedside as much as we could,
occasionally taking a break to pump milk, eat and sleep (not that we could eat or sleep much at all). In hindsight, we should have taken better care of ourselves, but at the time, all we could seem to do was move from one hour to the next. Both Chris and I succumbed to colds which was just horrid and made us so scared of passing on any infection to Ethan.

Ethan had observations taken by the nurses every four hours (blood pressure, temperature, sats, heart rate, breathing rate), was fed via NG tube every three hours, medication administered as required, blood samples taken frequently and various scans, xrays and ECGs performed regularly. It felt continuous, one thing after another being ‘done’ to our little baby. No privacy. No quiet time.
Just a relentless whirl of people and procedures. I had a few opportunities to try to breastfeed, but with Ethan never really being ‘hungry’ (given the frequent administering of milk via tube) and due to the extreme energy required to feed (one of the most energy intensive things for a newborn to do), he didn’t really ever feed for very long from me. His latch was good though and that gave me hope
that he had the instinct and ability to breastfeed later on. 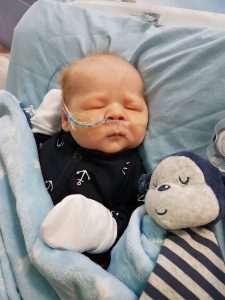 Eventually, it was decided that action needed to be taken sooner rather than later and Ethan was added to the schedule for surgery the following week, probably Monday. So we had our plan. Only that plan never came to fruition. On Saturday, Ethan took a very sudden turn for the worse. After a morning of observation, the doctors were becoming increasingly concerned about the amount of fluid on Ethan’s lungs and the poor function of some of his body systems (essentially as the pressure changed in Ethan’s lungs, more blood was being sent to the lungs rather than around the rest of the body, resulting in a lack of oxygen reaching vital organs). By mid-afternoon, he was moved through to PICU where they started to work tirelessly to stabilise Ethan’s condition.

He was put on a cocktail of drugs to medicinally reverse the effects. PICU was closed to parents whilst they worked. I was terrified and it really hit home when we were called into the ‘quiet room’ in the early evening and it was explained to us that the doctors had reached a point where they had done everything medicinally possible to save Ethan, and that they now needed Ethan to respond. We were so close to losing him that night and all we could do was will him to fight and stay by his side. The tears flowed
freely.

In the early hours, Ethan started to respond to the treatment and showed signs of gradual improvement. Even though we were exhausted, we wanted to stay with him, at least until we felt sure things were moving in a positive direction. I think it was around 3am that we decided to get a few hours sleep so that we could get through the next day.

The following morning, Ethan continued to fight and it was agreed that the surgeons would perform surgery that day. With it being a Sunday, many staff were called in. We are so grateful that the team could be assembled so quickly, and by lunchtime, we were back in the ‘quiet room’ going through the consent form. Despite all of the risks that inevitably come with open heart surgery, we had no choice but to consent. The simple truth of the matter is that Ethan would not have survived without surgery. So I just tried to keep it together as best as I could in a situation that you wouldn’t wish upon anyone, and I put all my trust and hope into the Glenfield team.

I kissed Ethan goodbye, tucked ‘monkey’ in with him and told him how much I loved him and that he just had to keep fighting. He
was wheeled away and I sobbed. We were told that the surgery would be long, the absolute minimum time would be five hours, but it could be nine. As it was, it took around seven hours. It felt a lot longer than that.

The nurse called us to say that Ethan was out of surgery and we could see the surgeon to discuss the outcome. The repair had gone well and Ethan had four bovine ‘patches’ successfully added, one for the ASD, one for the VSD and two for the AP window. All seemed well and we went into PICU to see him.

Nothing could have prepared me for seeing him in that way – his chest had been left open in case of further swelling (I couldn’t believe I could actually see his tiny little heart beating through the transparent dressing). He had three chest drains coming from his chest to
collecting bags at the side of his bed. He was on a ventilator to help him breathe. He had lines seemingly everywhere in his body with a concoction of pain relief and medication being administered. The ‘usual’ monitoring was ongoing, adding to the leads/cables all over. He had a sats monitor on his forehead. And he was swollen, so incredibly puffed up, everywhere, his face looked
completely different. 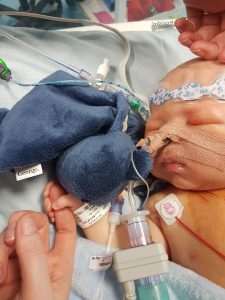 As time went on, the doctors realised that something wasn’t quite right and it became apparent that there was a regurgitation on Ethan’s aorta, at the aortic valve. It was suspected that the valve had been damaged in some way during the surgery. To my horror, it was decided that Ethan would need another operation to try and repair this damage. I couldn’t believe we all had to go through that again. The surgery was planned for the following day.

We repeated the motions of two days earlier, waiting for the call. It came around six hours later – Ethan was well. Relief. They had patched a small hole on the valve using tissue from his pericardium. Subsequent scans showed that there was still mild to moderate regurgitation but that for now, Ethan could begin his surgical recovery. We were told that his heart had actually stopped for around ten seconds towards the end of the operation (once he was off the heart-lung machine), but restarted after being massaged. Again, Ethan’s chest
was left open.

From there, Ethan began his road to recovery. He spent a further few days in PICU, day by day having ‘things’ removed from his body. The chest was closed after two days, then the chest drains were removed. Various lines were taken out. The brain sats monitor was taken off. On Saturday, he was taken off the ventilator (a huge moment) and I was able to hold him for the first time in six days.

I was overcome. My baby boy. What a fighter. What a miracle.