Caitlin discovered her baby had a serious heart condition, Transposition of the Great Arteries, at her 20 week pregnancy scan. Here she shares Eliot’s story:

We discovered our baby’s heart condition, Transposition of the Great Arteries, at our 20 week scan at our local hospital.

The sonographer was spending ages looking at the heart and not saying much, I remember squeezing my husband Tom’s hand and him asking ‘is everything okay’ and that’s when she said, ‘I think there is something wrong with your baby’s heart.’

They did a referral to University College London Hospital and made me an appointment for the next day, where it was confirmed that baby had Transposition of the Great Arteries (TGA) and a large Atrial Septal Defect (ASD).

I remember the nurse giving us leaflets and talking through how we would need to give birth there in London, and how baby would be taken to Great Ormond Street for a life saving operation within the first week of life. The words I clung onto though were that baby was safe and well in my tummy and that’s what kept me going.

Over the next few months of my pregnancy, I had scans in London and at my local hospital to make sure there were no other defects. Each appointment was a mix of dread but excitement at getting to see our baby.

It was decided that baby would be delivered by Cesarean when I was 38 weeks. We had a walk round PICU at UCLH and visited the wards at GOSH but I still felt so unprepared for everything.

Our baby boy Eliot was born on the 24 January 2019 and I got to say the quickest hello before he was whisked off for the first of many echocardiograms. My husband stayed with him whilst I was still in theatre and after a long wait I got to say my first proper hello. By this point he had numerous cannulas and was on a drip that was keeping his ASD from closing (as this meant his blood was still mixing despite his arteries being the wrong way round). Because his ASD was so large it meant that he didn’t need to have the balloon septostomy and he was doing better than expected.

We got the call on the Saturday that GOSH was ready for us and he was blue lighted over there (husband in tow) as I was still waiting to be discharged.

That following Tuesday 29th January is when we handed our sweet baby’s life over to the amazing surgeons who performed an arterial switch operation and closed his ASD. We waited seven long hours for the phone call to say that he was out of theatre and it was a success. 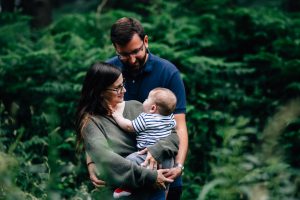 The next few days he slowly began losing more tubes and wires and started to look more like our baby boy again as the swelling went down and his chest healed, he was more alert and fighting with everything he had to get home!

After another week we were discharged from GOSH with an appointment to come back in a month for a check up, then three months, then six.

Along with his TGA and ASD he also had three small Ventricular Septal Defect (VSDs), two of which closed up on their own by our second check up.

Congenital heart disease is life long and we aren’t out of the woods yet, but never underestimate the fighting power of a little baby. They will amaze you with how resilient they can be.

Eliot has blessed our lives and we are so lucky to be his parents. These amazing babies truly are heart warriors!