John’s son, Sebastian, was born with an undiagnosed VSD (hole in the heart). He shared the first part of Sebastian’s story in 2020 and Sebastian’s mum, Julie, provided an update in 2022:

My wife and I have a son, Sebastian, now three years old, who was born with an undiagnosed large VSD.

After not putting on weight and struggling to feed due to tiredness and other associated issues for his first three months, he then developed bronchiolitis, collapsed at home and was rushed to hospital.

Here, they finally heard the loud heart murmur that tells of a CHD issue. A week later he was diagnosed with the large VSD and also an ASD.

Sebastian had his first open heart surgery to patch the VSD at approx. five months old.

Due to the fact his heart has a kink in it where the VSD patch is, his blood has to turn a corner when being pumped out. This increases the pressure and caused scar tissue to build up over the next nine months that began to block the artery.

He had his second open heart surgery to cut back the scar tissue at 22 months old.

Due to the way his heart is wired, this was more complicated than otherwise. (All our hearts are wired one of two ways; around the outside or through the middle.) His is wired through the middle by the scar tissue.

Thanks to the skill of the surgeons, the perfect amount of scar tissue was cut back without cutting into the ‘wiring’. Otherwise he would have required a pacemaker.

Sebastian is being monitored every six months and so far is showing no further signs of any post surgery complications, other than he gets tired more quickly than his peers.

The post-op check up went really well. The operation was an absolute success. Even better than last time. Due to Sebastian being bigger, they had more space to move and could cut the maximum amount back without damaging the wiring of the heart.

He started back at school this week for mornings. That was a good decision, as he is tired afterwards. It will take some time to build back up.

He really is a fighter. We are very proud of him.

Find out more about VSD here. 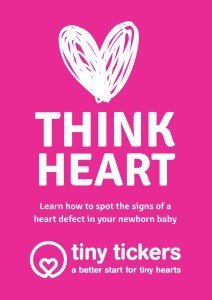 Our Think HEART campaign is a really easy way for parents and health professionals who aren’t cardiac specialists to know the key signs that a baby may have an undiagnosed heart condition. Learn how to Think HEART here.