Coarctation of the Aorta: Amy’s Story

Amy’s heart conditions, Coarctation of the Aorta and VSD, were detected when she was 12 weeks old, at a routine appointment. Doctors were amazed she had made it that far without intervention. Here, Amy’s mum Jenny tells their story: 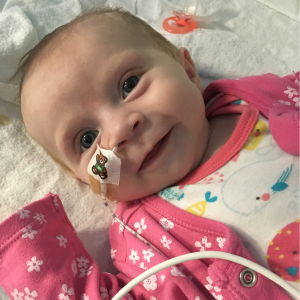 Amy was born on 9th September 2018, our third child, weighing 6lbs 2oz and a happy, healthy baby girl. She was discharged from hospital and, although did not seem to be gaining weight, was doing all the normal things a newborn should be. She was seen by a GP at around 7 weeks, as our health visitor was concerned about her breathing and weight, and diagnosed with a virus. She was seen by a GP for her 8 weeks check and although he heard a murmur, Amy was signed off.

At 12 weeks Amy was due to attend an outpatient’s appointment which had been arranged as a matter of course as I (mum) had a heart murmur.

On Wednesday 29th November everything changed…

Waiting for the appointment, I was thinking about all the other places I needed to be, and this appointment was just going through the motions. An echo was carried out and initially a VSD detected. The consultant then believed he had seen a Coarctation of Aorta. Amy had become distressed, so he wanted to repeat the scan after his next appointment. We waited. 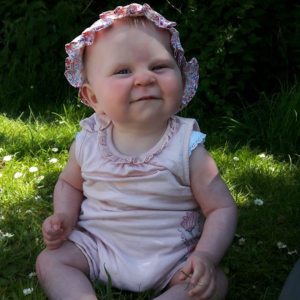 The next scan confirmed his initial findings, and he sent the report immediately to GOSH. He explained she would need live saving surgery and this could only be carried out at GOSH. Amy would need to stay in hospital, but he would wait to see if GOSH agreed. It was the worse 20 minutes of my life, hoping he was wrong and not knowing whether to ring family and worry them. My husband rang, and I said he needed to get the hospital now, Amy has a life-threatening condition, within the 20 minutes the consultant returned and confirmed his findings were correct and we were admitted to the children’s ward.

Amy was put on a drip feed and linked up to monitors, all of sudden we were in a room full of people. We were questioned over the last 12 weeks of her life, while trying to process what was happening. It didn’t seem real and it did seem possible. We spent Thursday 30th November waiting for an appointment at GOSH and had to tell Amy’s older brothers that she was seriously ill and needed treatment. It was heart-breaking.

On Friday 1st December, we were taken by ambulance on blue lights and sirens to GOSH, examined and admitted. For the next four days we had to keep Amy stable and hope and trust in the doctors at GOSH to put the best possible plan together for Amy. We were relieved that they decided open heart surgery could be deferred in the hope that the minor VSDs would heal and on 6th December she underwent surgery for 3 hours. She made a fantastic recovery; however the future still remains uncertain for Amy as she faces the possibility of further surgery for her VSDs and heart valve. 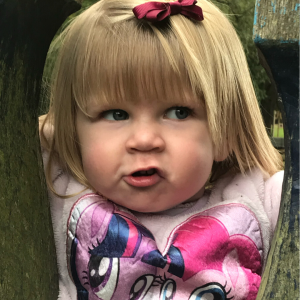 The situation was a complete rollercoaster ride which has impacted us both as parents and our older children, but every day Amy takes her condition in her stride. We owe so much to the amazing teams at Luton, Dunstable and GOSH, who said we do not know how she got so far without suffering cardiac arrest. We are forever in debt to these amazing people who saved her life. We now want to help raise awareness and try and ensure another family will not have to experience the same situation or worse.

At the time you do not realise the impact these events have upon you as a person, or as a family, however in time and having spoken to many healthcare professionals, we understood how lucky we had been not to have lost her. We cannot be more grateful to have the opportunity to put things right for Amy. There is no ‘right’ time to discover your child has a heart condition, however we would not want any parent to experience what we went through or worse.