Zareenah’s heart condition, pulmonary stenosis, was diagnosed at mum, Homaira’s 20 week scan. After she was born, doctors discovered Zareenah also had a VSD and an ASD. This is her story: 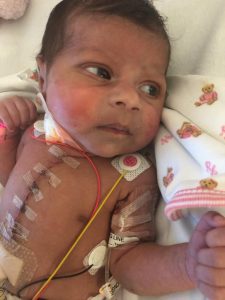 It was at our 20 week scan that our heart journey began. I was  having, what I thought was, a routine anomaly scan. It seemed to be going on for a little longer than I remember from my first pregnancy. Then the sonographer spoke the dreaded words: ‘I think there is something wrong with your baby’s heart’.

We were immediately transferred from our local hospital to St. Mary’s in Manchester, where specialists took over our care and confirmed that the baby had a condition called pulmonary stenosis. This is where the pulmonary valve, which pumps blood to the lungs, is narrowed and therefore does not allow the heart to pump blood normally.

On the 26th February 2019, our beautiful baby girl was born via emergency c-section. She was four weeks early at 36 weeks. As soon as she was born, she was whisked away to neonatal intensive care (NICU) and hooked up to a drug called prostaglandin, which keeps the ductus arteriosus open to help the blood flow. I didn’t get to see her until almost 12 hours later, and it was the most overwhelming experience – seeing your new baby full of wires and machines all around her. 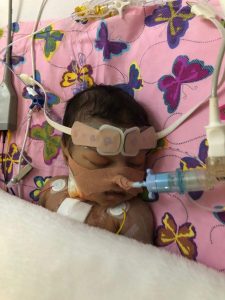 Zareenah remained stable in NICU for around two weeks, while we waited for her to be transferred to Alder Hey for surgery. By week three she was really starting to struggle. The ductus arteriosus  had started to close despite the increased dose of the drugs to keep it open. Her oxygen levels were getting dangerously low and she started relying on help of Opti flow (oxygen). We barely saw her awake during this period, as she was always so tired from her heart working so hard.

Finally, at three weeks old, she was transferred to Alder Hey. They did a more detailed scan and found, not only the issue with her pulmonary valve, but that she also had two holes – a VSD and ASD. The right side of her heart also appeared to be very muscular. The day after arriving at Alder Hey a catheterisation procedure was performed, where a balloon is inserted in order to stretch and open the valve.

Unfortunately, this procedure didn’t work and seven hours later our baby girl came out of theatre in a grave condition. She was fully ventilated and in intensive care. The day after this nightmare, emergency open heart surgery was performed to repair her broken heart. Zareenah spent just another week in hospital before we were able to take her home.

Zareenah is now how doing really well. She still has heart related issues which affect her daily and will need more surgery in the future, but for now she is thriving.

We continue to use Tiny Tickers and other CHD platforms for support, as looking after a heart baby is a daily struggle and as a parent you need a support network around you. It is vitally important in the early days to find platforms that give you support and guidance. That is what Tiny Tickers does, and we thank you.

Find out more about our support services here.