When Ruby was born, she appeared to be in perfect health. However, a pulse oximetry test detected that her oxygen saturation levels were low and started the chain of events that would go on to save her life. This is her story, told mum, Debbie: 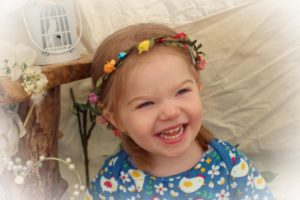 Ruby was born in October 2015, seemingly healthy. We were all packed up and set to go home the following day, when the midwife on the post-natal ward remembered that she needed to measure her oxygen saturation (SATs). This was assessed using pulse oximetry and is performed on all babies born in the hospital.

Ruby’s SATs were lower than they should be. A paediatrician decided it would be best for her to spend some time in the special care baby unit, initially diagnosing her with a lung infection.

As Ruby’s condition worsened, they decided to transfer her to the neonatal intensive care unit at another hospital in the early hours of the following morning. It was at this other hospital that she was diagnosed with suspected congenital heart defects and, on the same day, she was transferred to the Royal Brompton Hospital.

Once there, Ruby was diagnosed with Taussig-Bing anomaly, Transposition of the Great Arteries (TGA), an Atrial Septal Defect (ASD), Coarctation of the Aortic Arch, and Hypoplastic Aortic Arch.

The operation was a great success and thanks to the expertise of the wonderful staff at the Royal Brompton, we were able to take her home in a week this time round.

Her pulmonary valve will need to be replaced in the future, but for now, we have a very smiley, clever, bright, and feisty girl who is just like any other 3 year old.

Without the routine pulse oximetry testing that Ruby underwent shortly after she was born, the outcome could have been very different for us and we will be forever grateful that this simple test led to our daughter’s life being saved.’

Donate to Test for Tommy

Donate to Test For Tommy
1500
babies

tested, thanks to each pulse oximetry machine